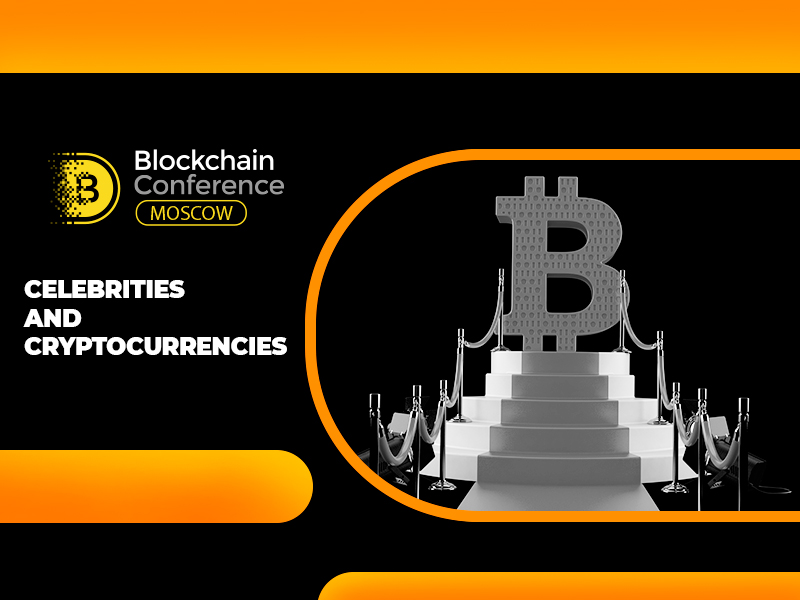 Cryptocurrencies are interesting not only to programmers and developers, but also to celebrities. Sports, cinema, and show business stars put money into Bitcoin, promote cryptocurrency projects, and even launch their own tokens. Let’s examine the list of celebrities who have believed in digital currencies.

In spring 2017, a Russian singer and TV host launched her own digital currency – Buzcoin. The coin raised $195,000 during token sale at a specified hard cap of $210 million.

This summer, a Russian actor and film director has announced the development of a blockchain platform called Cinematix in order to attract investments in the movie industry. However, in August, the project was put on hold because of disputes among its founders.

Another Russian director said that he would launch a platform to raise funds for filming. The platform is called Cinemico. It is aimed at the cooperation among film companies and investors. Companies will sell tokens, while supporters will receive a percent of box office receipts.

In 2010, an actor and Guy Oseary established an investment company A-Grade Investments. They bought up shares of IT companies and put money into such startups as Uber and Airbnb. In 2013, Ashton Kutcher’s company invested a huge sum in BitPay, a bitcoin payment operator.

Besides, the actor spoke well of decentralized technology at the TechCrunch conference.

In 2015, a British actor bought bitcoins amounting to $5,000. He did not take a close look at the crypto market analysis but just followed the advice of his friend. Further destiny of coins is unknown.

In 2015, a boxer tweeted that he was launching his own network of Bitcoin ATMs. In half a year, Mike Tyson’s company installed ATMs and designed a mobile app for trading.

A co-founder of Apple Computers also became interested in cryptocurrencies. Talking to CNBC, Steve Wozniak said that he failed to buy bitcoins at the earliest stages. And when he purchased coins, their rate plummeted. Despite this fact, Mr. Wozniak asserts that Bitcoin is the most stable currency on the market. It is just a mathematical aspect of cryptocurrencies that attracts him.

In 2014, Bill Gates admitted his interest in Bitcoin during the interview with Bloomberg L.P. Later on, the founder of Microsoft expressed his negative opinion regarding cryptocurrencies several times. In spring 2008, Tyler Winklevoss, a co-founder of Gemini Bitcoin Exchange, responded to one of such statements. On Twitter, he explained Mr. Gates how to open a short position against the first cryptocurrency.

An Oscar holder took interest in digital currencies in 2017. On his Twitter page, the actor promoted Cobinhood, a Bitcoin exchange guaranteeing investors a zero trading fee.

In 2017, a boxing champion of the world became an ambassador of a market analysis project – Stox. Moreover, he promoted Hubii Network’s ICO and asked his followers to invest in Centra crypto project’s ICO.

Moreover, he is a representative and investor of Cobinhood, a cryptocurrency exchange for zero-fee trading.

In autumn 2018, an actor started cooperating with TaTaTu, a blockchain startup producing movies. Under the agreement, Johnny Depp and TaTaTu will collaboratively produce films and digital content.

A model and Miss Iowa 2014 has founded a blockchain platform for the cannabis sector – ParagonCoin. Jessica Versteeg was going to make cannabis sales transparent using PRG tokens and smart contracts.

A singer, in cooperation with UK-based Blockpool, offered her listeners to buy her new album ‘Utopia’ for Bitcoin, Litecoin, and Dash.

In 2015, a rapper released his ‘Bush’ album available for bitcoins. The album cost $15.95 equating to 0.3 BTC. The amount of sold copies is unknown, but according to the current rate, Snoop Dogg would earn $1500 on each record.

Blockchain technology keeps evolving and advancing, and it has already managed to show its potential. Cryptocurrency has become a window of opportunity to earn well for some people and the way to make purchases and orders on the Internet for the rest.