FAQ: terms from the world of cryptocurrencies and mining 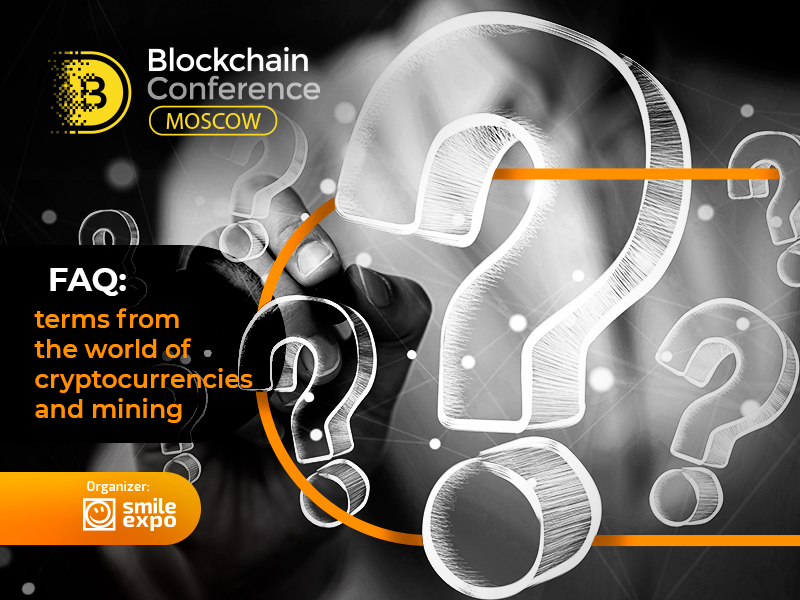 Arrival of cryptocurrencies significantly influenced the development of economy and the blockchain technology is actively integrated in all possible areas of life. It is not surprising that a growing number of terms related to digital assets and mining enter our everyday life. Many of them have been already added to modern explanatory dictionaries, for instance, the US Merriam-Webster. Which cryptocurrency terms should modern people know, especially those who want to deep dive into the topic?

Altcoin. The term is used for any kind of a cryptocurrency except the first one – Bitcoin. A general, collective term that denotes Litecoin, Ethereum, and other types of digital currencies.

Token. A payment unit or a reward tool, which slightly differs from cryptocurrencies (intended only for making payments). Tokens usually serve as a security in a digital form, but simultaneously can have other purchasing power.

Fiat money. A real payment means that exists in physical form, legalized at the state level and assessed at nominal value. Most of global non-digital currencies belong to fiat.

Cryptocurrency wallet. A digital wallet used to store cryptocurrencies and tokens. Wallets are classified by the type of storage: cold (offline) and hot (online).

Cryptography. Principles of data storage and transfer that allow reading and processing data to only those people whom it may concern. Cryptography forms the basis of cryptocurrency functioning and is used as a data encryption tool.

Fork (hard fork, soft fork). A split from the core code of the cryptocurrency to create a new one. Forks differ by the speed of issuance and encryption algorithm. There are minor modifications (soft fork) and major, conceptual modifications (hard fork). In the first case, the fork does not differ much from the initial code, and in the second case, the consensus mechanism experiences global changes.

Hash, hashing. The basis of security of cryptocurrencies, a specific transformation of data of any volume. A hash value is a unique number that encrypts some text.

ASIC. A special device intended to mine cryptocurrencies. ASIC stands for application-specific integrated circuit. It allows quickly deciphering blockchain algorithms and as a result mining bigger sums of cryptocurrency than when using graphics cards.

Attack 51%. A situation where a group of users gets control over more than 50% of the computing power of the network and influences the process of block mining. It requires huge computing capacity, especially for an attack on popular cryptocurrencies.

Mining pool. A server that unites miners for joint mining of cryptocurrencies. As mining requires a growing amount of computing capacity, it became unprofitable to do it alone long time ago, so miners unite in pools. They receive rewards depending on the share of the computing capacity they invested in the joint activity.

PoS/PoW. Principles of validating transactions on blockchain of a definite cryptocurrency, consensus mechanisms. PoW (Proof-of-Work) is a model that allows a miner to receive the reward for mined blocks. PoS (Proof-of-Stake) is a protection method for cryptocurrencies that do not mine blocks. This algorithm allows forging blocks to users that have a bigger balance rather than more powerful hardware.

Nod. A computer that is connected to the network of specific cryptocurrency and uses a p2p protocol. This protocol allows interacting with other nodes and distributing transaction data. A node can store complete or partial information about blockchain.

CPU mining. Execution of complex computations using a central processing unit. It is unprofitable to mine the majority of most popular cryptocurrencies using this method, as it does not provide enough computing capacity, but some digital currencies can be still mined with CPUs (ZCash, Dogecoin, Litecoin).

ICO. Initial coin offering (token issuance) analogous to initial public offering on an exchange. Unlike the traditional fundraising method, ICO is more beneficial and simplifies the launch of projects and search for investors (it’s also a way to become an investor).

Scam. A shady ICO project obviously created with the aim of fraud or a project that initially gained trust but ceased to exist not having fulfilled all obligations to investors.

Bounty. Free distribution of a number of tokens at the start of an ICO as a present to enthusiasts that promote the project. Organizers use the system to create a more large-scale advertising for their product – promotion in social networks, on forums, making translations, and writing texts.

White paper. A detailed presentation of an ICO as well as a thorough business plan and development scheme. The white paper and quality of information specified there allows users to assess the reliability and long-term benefits of the project.

Roadmap. Clearly stated terms of an ICO project and distribution of funds at every stage. Put simply, trustworthy projects should provide a scheme they will use to spend the raised funds.

Do you want to learn more about the world of cryptocurrencies and subtleties of mining? Come to Blockchain Conference Moscow dedicated to blockchain, ICO, and cryptocurrencies. The event will gather leading global crypto experts, investors, blockchain enthusiasts, entrepreneurs, and developers that will share up-to-date information.

The conference will take place in Moscow (InterContinental hotel) on November 20. You can read the program of Blockchain Conference Moscow on the official website of the event.