“Dream: to transfer bitcoins with the power of thought”– сyber.Fund 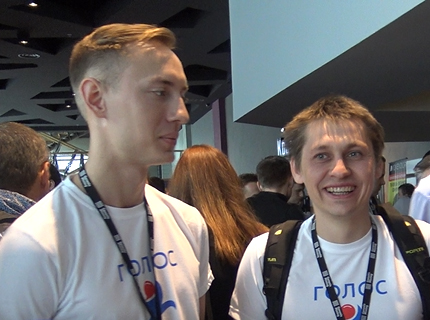 Team of сyber.Fund is launching a blockchain-based media platform – “Voice”.

We had a shotgun interview with project developers Valery Litvin and Dmitry Starodubcev at Blockchain & Bitcoin Conference Kiev on September 23.

BBCR: Hello! What are you working on now?

V.L.: Currently, team of cyber.Fund is working on a social media platform Voice based on Steemit blockchain. We are launching it for the Russian-speaking audience soon.

D.S.: The main idea is to provide people with a possibility to do the same things as they do on Facebook, Instagram, Twitter – to write articles, give likes, leave comments – and receive money for it. This model works quite well (on a relatively small scale) for English-speaking users, as in the case of Steem. We just want to take what is already available, and give it to Russian people. Meanwhile, we will ourselves check out the technology used for the creation of the platform.

BBCR: Unlike many other projects, your team deals only with practical things based on blockchain: one can have a look on them, touch them. What other projects can interest the audience?

BBCR: Yours and those that you know about.

D.S.: Why not? Of course we can tell. We have an idea of two devices. The first one – a rather powerful computer made from generally available hardware. It’s called Enterprise. It will mine… Well it will be able to make money by automatically selecting networks or a network, for which it will be working.

V.L.: In fact, it’s a multinode that provides a centralized API for leading blockchains.

D.S.: The second project is connected to virtual reality and transactions processed with the help of neurointerface.

V.L.: When we launch the Voice project and have some free time, we will experiment with virtual reality: we would like to enable fulfilling specific actions with the power of thought – for example, to run the first bitcoin transaction.

D.S.: Our dream is to transfer bitcoins with the power of thought and to watch it happening. In Oculus headset or anything else.

These were the main theses of our short talk during the coffee break. You will have an opportunity to learn more about the Voice project on November 10, as well as to talk to Valery and Dmitry in person. They will give a presentation as part of separate stream for representatives of nonfinancial spheres.