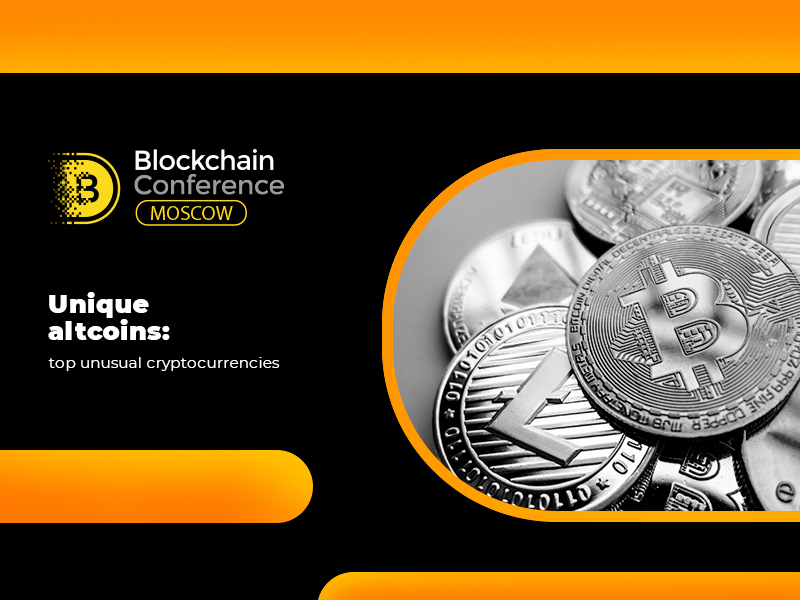 As of October 2018, capitalization of the cryptocurrency market is $209 billion, with 2070 digital coins being designed altogether.

New cryptocurrencies regularly enter the market. Some of them aim to outrun such giants as BTC and ETH, but there are also coins with strange goals and applications.

The article describes core tasks of altcoins and the list of the most interesting cryptocurrencies with unusual application areas.

Altcoins are coins alternative to bitcoins, i.e. the term refers to all cryptocurrencies except for BTC.

Altcoins started emerging in 2011 in order to overcome Bitcoin’s technical limits and solve challenges of the first cryptocurrency.

Well, altcoins add mining features and alternative protocols. Besides, some of them are able to increase the level of anonymity and speed up transactions.

Each altcoin offers technical novelties, unique features, and innovative approach to its usage. Given below are cryptocurrencies with uncommon goals; the coin price is provided as of October 26, 2018.

PotCoin is a fork of Litecoin appeared in 2014. It is the first cryptocurrency developed as a way to pay for goods in the legalized cannabis sector. However, coins allow not only to buy cannabis but also to pay for purchases in other areas today.

Citizens of all countries are able to use coins. Moreover, the developer states that a PotCoin account will never be blocked.

According to PutinCoinfo unders, the coin has been developed to pay their respects to citizens and President of the largest and greatest country – Russia.

Cryptocurrency was launched in 2016. Creators claim that it offers new opportunities to businesses, traders, and social projects.

One more crypto coin – Putin Classic – was devoted to the President of Russia. It was set to be a digital souvenir without any global goals.

Mr. Putin is not the world’s only president whom one has dedicated cryptocurrency. Donald Trump, the current US President, also obtained his own coin in 2016.

The platform calls for buying TrumpCoin in order to support the US politician and create a prosperous future for all Americans and people of the world.

Dogecoin is the most popular and the first joking cryptocurrency. The coin was designed in 2013 by Jackson Palmer, Adobe Product Manager, and Billy Markus, IBM Engineer.

The cryptocurrency name refers to the popular Doge meme. The digital coin appeared not by accident: one of the founders came up with the idea of acquiring the Dogecoin.com domain over a glass of beer.

UFO Coinis a cryptocurrency with a strange name developed in 2014.

Nevertheless, cryptocurrency is not designed for exchanges with aliens. In this very case, the abbreviation ‘UFO’ stands for the uniform fiscal object, which means performing features of conventional currency.

At the same time, UFO Coin has its unique trait: it is based on NeoScrypt technology providing higher security level.

Sexcoin is a cryptocurrency allowing to pay anonymously for adult goods and services. Its founders are striving for developing the adult entertainment industry.

Cryptocurrencies will be discussed by blockchain experts at Blockchain Conference Moscow.