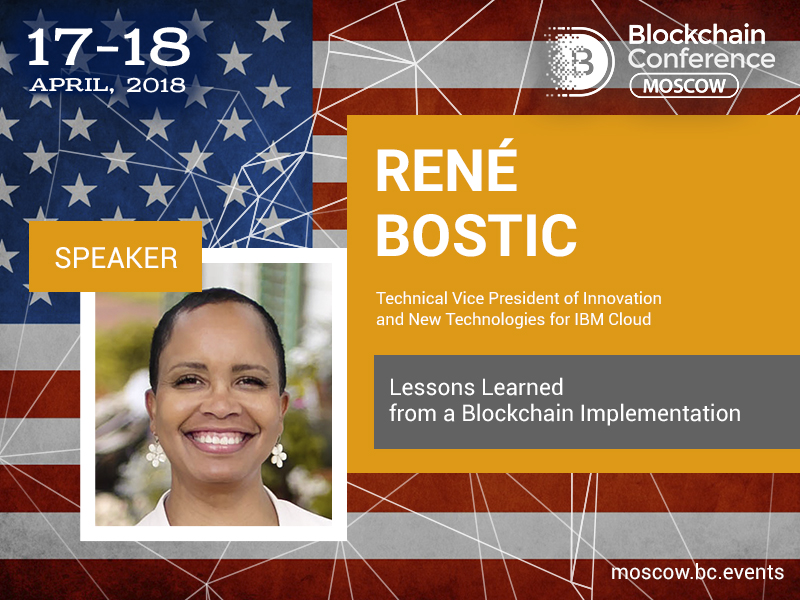 René Bostic (the USA), the Technical Vice President of Innovation and New Technologies for IBM Cloud, will give a presentation at Blockchain Conference Moscow on April 18.

The representative of the world-renowned IT company will be speaking about blockchain implementation from the concept to realization.

René Bostic believes that blockchain opens new styles of digital interactions. The technology makes it easier to create cost-efficient business networks where virtually anything of value can be tracked and traded, and that is why blockchain has a huge potential, according to the speaker.

From her report, attendees of Blockchain Conference Moscow will learn how to deploy blockchain in business, listen to the analysis of a case study based on an active blockchain business network, and the key considerations for a successful blockchain implementation.

René Bostic is the Technical Vice President of Innovation and New Technologies for IBM Cloud. She is an expert in cloud computing, DevOps and emerging cloud technologies such as blockchain. René received a Business and Economics degree with a minor in Computer Science. She has presented at various conferences including Cloud Expo East 2017 and Agile2017.

The presentation targets people engaged in blockchain projects or considering the implementation of blockchain in their business.